Hi, I’m Aluka from Kaiator (NA). I’ve been an archer main since 2016 and have cleared all content released since then. I play archer because of its high damage while also being one of the safest classes in the game. This is due to archer having one of the highest in combat movement speeds, combined with the ability to reposition while charging your skills.

Archer is a very ping reliant class due to high ping dependency on certain core skills. The role of an archer in a party composition is to do consistent dps in and out of the bosses enrage window.

This guide will cover the basics of archer as well as help min/max your stats and rotations.

Weapon rolls are person preference but chest gloves and boot rolls should always follow this guide.

Crit power bottom line is nice for lining up your windsong with Lancer’s party buffs.

Stack all the power you can get after achieving the crit factor you’re aiming for. The recommended crit factor needed with Exodor patch is around +140-160 bonus crit, or 200-220 total crit. (Including healer/food buffs)
You want to use the least ammount of crit jewelry needed to reach this cap.

When running with a Mystic the ideal jewelry set to use would be:

Highest tier mask you can get (CDR or Crit/Power)
Annihilation mask with good rolls is best in slot.

Best belt you can get (Crit 6 / Power 3)
Annihilation belt with good rolls is best in slot.

2x Energetic
You can use any combination of Energetic or Pumped, but 2x Energetic is recommended for Apex.

2x Grounded
Archer takes more damage than most classes so endurance will help you survive more than HP.

Whatever combination of etchings that will let you reach your desired crit factor.

Archer will use these three crystals in every setup:

Any mix of Keen and Powerful Vyrsks to reach the your desired crit factor.

You won’t be using auto attack, all glyphs are useless.

Decent filler for when most of your other skills are on CD, not worth glyphing though.

(Charge up an arrow by holding down the skill button then shoot the arrow up to 18m away by releasing the button. Charges to three levels. Overcharging beyond the third-level charge will damage you. While charging up, you can move at half speed.)

One of your core damage skills, can move while charging.

(Charge up an arrow by holding down the skill button, then shoot the arrow at up to 15 targets in a 18m line by releasing the button. Arrow shoots when you release the button. This skill charges up to 3 times. Overcharge after 3rd level charge will damage you. While charging up, you move at half speed.)

Radiant except no crit multipliers and does less damage, still a very good skill when it crits.

(Shoot arrows in the sky; they descend 15m away and damage targets in a circle when they land.)

One of your core damage skills. Cast this when you know the boss wont turn during your cast animation. Will hit most bosses while being only 5m away.

(Quickly back up out of harm’s way)

One of your two iframes, can be use to reposition yourself faster if needed.

(Deceive monsters by pretending to be dead. This resets all aggro on you. You can feign death for up to 1 min. Ends when you use a skill or take damage.)

Drops all aggro on you, helpful in certain situations.

(Hold down the skill button to quickly fire up to 7 arrows 18m away. Each successful hit generates 1 stack of Focus.)

One of your core damage skills. VERY PING RELIANT . You’re locked in place when casting this skill so make sure you only use it when you can get it off before having to reposition. Cancelling this skill before using the final tick will result in you losing 30% of the skill’s damage.

(Set a trap that briefly slows the victim’s movement speed by 70%. The trap lasts for 15 seconds or until triggered.)

(Set a trap that briefly stuns the victim, The trap lasts for 20 seconds or until triggered.)

Decent duration stun if you ever need it.

(Set a trap that damages the victim that steps on it and others nearby. The trap lasts for 12 seconds or until triggered.)

Melee damage trap, decent filler if you’re within melee range of the boss.

(Shoot an explosive arrow that damages within 4m, then step backward.)

Another iframe and movement skill. Longer cooldown than backstep but the iframe is also slightly longer, helpful when trying to iframe something you’re not used to. Decent dps if it hits the boss.

(Shoot an arrow up to 18m, inflicting damage and slowing the target’s movement speed by 33% for 7 seconds.)

Sightly higher dps than auto attack if you’re completely out of skills to use.

(Strike a foe in front of you. Press the skill button twice to make a second attack that may stun the foe.)

Another melee stun, can use the first kick to move you slightly forward. Very situational.

(Shoot an arrow dripping with lethal poison. The arrow flies 18m, inflicting damage to the target and additionally inflicting 3,128 damage every 2 seconds for 12 seconds. Can be stacked up to 3 times.)

Another filler, bit slower than Restraining Arrow and does a little more damage.

(Shoots an arrow up to 18m, decreasing the target’s Movement Speed by 50% and Attack Speed by 15% for a short time.)

Cancels the recoil on Radiant, Penetrating and Thunderbolt.

(Launch a trap 15m in front of you. The trap lasts for 10 seconds or until triggered. Briefly stuns the target and surrounding enemies.)

Ranged stun if you ever need it.

(Launch an arrow up to 22m in front of you. Explodes when skill is activated again. Briefly slows the target and surrounding enemies.)

(Launch a trap 15m in front of you. The trap lasts for 10 seconds or until triggered. Inflicts explosion damage on the target and surrounding enemies.)

Ranged damage trap. Your best filler, does a ton of damage when it crits.

(Shoot a concussion arrow up to 24m away. The shock will cause damage and knock enemies back. It cannot knock back bosses or BAMs.)

Your highest damage skill, use this off cooldown.

Useless Mana regen skill, could be of use if you’re not using Rapid Fire but mana pots are better.

(Your next attack is considered to be an attack from the rear, regardless of your relative position. Effect lasts 8 seconds, or until you hit a target.)
(With apex: When aimed at a monster, increases next Radiant/Penetrating/Thunderbolt damage by 20% when fired from arrow. This arrow will last for 8 seconds if not consumed.)

Skill animation can be cancelled with any of your other skills, use this when you aren’t busy with other skills.

(Charge a short distance (17m) in the direction of movement. Stops when you encounter an enemy. Applies “Huntsman” apex passive.)

(Dash 5m, and shoot an arrow at your target. Increases damage of next Radiant/Penetrating/Thunderbolt by 10%. Cancels all other animations when used.)

This skill won’t move you if there is no directional input when cast. Use this for cancelling the final animation of rapidfire/breakaway.

(Increase attack speed by 10% for 22 seconds and resets the cooldown of FindWeakness/Radiant/Penetrating/Thunderbolt/RapidFire/SequentialFire and lowers their cooldown by 50% for the duration.)
(While active, increase the attack speed of Radiant/Penetrating/Thunderbolt by 30% and lowers the number of attacks done by Rapid Fire from 7 to 4, while increasing its damage.)

Use this skill during enrage, higher priority than Gust Arrow.

(Shoots an empowered arrow that staggers and knocks down all enemies within 40m.)
(This skill has a small iframe while the arrow fires.)

Use this when you’re sure the boss won’t jump or turn randomly. Don’t use during Windsong.

Level 70 apex glyphs, can switch BB powerlink for BB CDR/Chase CD/trap damage.
Use any combination of those glyphs before you get the lvl 70 WW glyph. 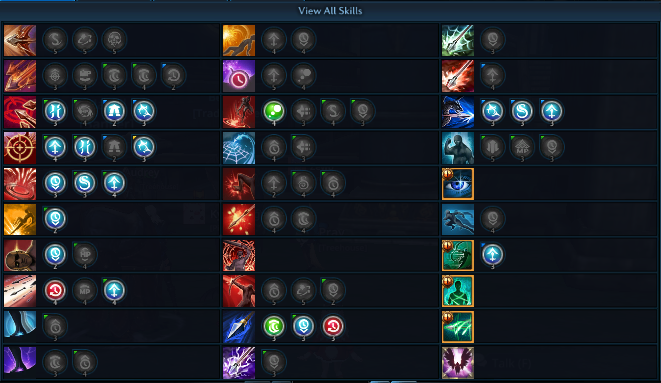 Feel free to level RoA and SF before WW if you don’t have enough level 70 scrolls to level it.

– Only useful for mass pvp.

– Doesn’t stack with healer debuff, only use when soloing or debuffing a large group of mobs.

– Extra damage, you’ll be using this 99% of the time. Makes skill harder to land.

– The only useful one here.

– GUST arrow people after you pop this in pvp. Useless anywhere else.

10 stacks of focus gives you a buff that gives you 0.4 crit power, 7% crit chance and increases Radiant and Penetrating charge speed. This effect can be stacked while the initial buff is active so try to keep 100% uptime when you can and prioritize keeping your focus if it’s about to fall off.
Every hit of rapidfire gives you 1 stack of focus (7 stacks total) and every hit of sequential/ww gives you 3 stacks, which makes 1 full cast of rapidfire + sequential/ww give you the buff.

Make sure you always have WindWalk buff before use Radiant/Penetrating/Thunderbolt.
(Priority is from top to bottom)

Radiant Arrow – High dps 100% crit. This skill should be prioritized over RF resets when boss HP is below 40%.

Rain of Arrows – Still a very good skill even if it doesn’t get buffed by Windsong.

Use fillers such as Explosive Trap and Auto Attack after if none of these skill are up.

You always want to start off a fight like this to get 10 stacks of focus before you use your main dps skills.
Replace RA>SF with RoA if you’re starting behind the boss.

Repeat this until Windsong runs out.
I didn’t include RoA in this rotation because depending on when you pop windsong RoA might not be off cooldown to use in a specific spot. But it should be used in place of penetrating arrow when available.

Exodor patch changed how crit scaling works, so just hitting crit cap on skills like RA and TB is no longer good for dps. Aim to hit around +140-160 bonus crit, or 200-220 total crit.

Since Essential mana has a good EP calculator I’ll be putting my recommended EP builds here using that.
https://essentialmana.page.link/1ocG
This is what you’ll want to get when you have enough EP for everything

https://essentialmana.page.link/b4CQ
While farming focus on just getting these skills leveled

Thanks everyone for reading my guide, I hope this guide answers all your questions about archer dps. If you have any questions leave a comment down below.
You can also join the discord which has some more info. https://discord.gg/z5fnx2c

Leave a Reply to Retaw Cancel